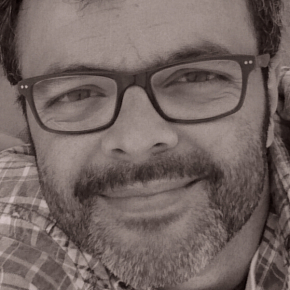 Anatael Cabrera: "The SuperChooz concept for studying neutrinos is much more ambitious than the two previous ones carried out at the Chooz power plant

IN2P3 and EDF signed a partnership agreement on September 7 to explore the feasibility of a large-scale neutrino experiment at the Chooz nuclear power plant in the Ardennes. Called SuperChooz, this project plans to implement a radically new detection technology that could position this European site at the center of global neutrino research. Anatael Cabrera, scientific leader of the SuperChooz exploratory project and inventor of this new technology explains the project.

What is the content of the agreement signed with EDF?

After the "Chooz" experiment in the 1990s, and then the "Double Chooz" experiment in the 2010s, this agreement, signed on 7 September, is a new step in the collaboration between EDF and IN2P3. It concerns the feasibility studies of a new research project on neutrinos, much more ambitious than the previous ones: the SuperChooz experiment. Under this agreement, our teams will be able to validate the new detection technology and its large-scale deployment, but also to ensure that there is a real scientific program at stake. On the EDF side, engineers will study the technical feasibility of the project at the power plant site, in particular the installation of the detector in the cavern of the Chooz A reactor currently being dismantled.

What does the SuperChooz project consist of?

Our ambition is to install a huge 10-kiloton detector, known as the far detector, along with two smaller detectors in the immediate vicinity of the two active reactors of the Chooz nuclear power plant. All three will be equipped with a radically new technology. They will be filled with a liquid, not a transparent one like all the other large detectors under construction in the world (JUNO, Hyper-Kamiokande or DUNE), but an opaque liquid in which light is trapped. This technique, named LiquidO and designed at the end of 2012, should allow us to study neutrinos with a precision never reached before.

How would an opaque liquid outperform transparent technologies?

With transparent liquids, a global flash of light is detected, which gives the energy of the incident particle, but without the possibility of identifying it with certainty because there are no "topological" details of the detected particle. With an opaque liquid, the photons produced by the reactions are trapped locally by scattering and collected by a narrow mesh of optical fibers. Instead of a single flash, we now have a complete temporal and geographical history of the particle reaction chain which allows us to sort out with great efficiency the signals coming from the neutrinos from those generated by the background noise. In the case of SuperChooz, the advantage is to be able to identify the very special nature of the neutrinos coming from the reactors, whose interaction in the detector leads to positron (e+) annihilation. The technology will allow us, if everything works as expected, to significantly reduce the background noise, typically dominated by particles like electrons (e-) and gamma rays (γ) in order to extract the neutrino signal. The complete validation of the LiquidO technology in nuclear reactors has already started. It is the subject of the AntiMatter OTech pilot project, funded by an EIC bringing together EDF and five international scientific institutions.

What could the SuperChooz experience bring more than the other experiences?

Our working energy will be around 1 MeV. An energy for which detectors like Hyper-Kamiokande or DUNE start to become blind. Our observations and results will therefore be complementary. JUNO, on the other hand, is an ultra-precision experiment which will have a great influence on neutrino science, but whose results will not be validated by another equivalent experiment with reactors. With a volume twice as small, SuperChooz should be able to bring a good fraction of this validation. But that's not all, beyond complementarity, SuperChooz will contribute to global precision measurements. For example, the measurement of the mixing angle "θ13" which has just been measured during the previous decade to the percent, could be improved in precision by a factor of almost ten. This information, along with others, are critical to the ultimate accuracy of all other experiments in the world. In addition, we plan to add indium to our opaque liquid to make it sensitive to electron neutrinos from the sun - a strategy much studied in the past but never implemented on an experiment. SuperChooz could thus become the first experiment in history capable of studying both nuclear reactor antineutrinos and solar neutrinos at a near-surface site. SuperChooz is thus a unique opportunity to test the parameters of the Standard Model, and to explore with great precision its symmetries.

How did the idea for this project arise?

Everything crystallized in 2018 when the dismantling of the Double Chooz experiment was approaching and the question was raised whether there was still a scientific program to be conducted on this site. At that time, EDF was beginning the dismantling of the Chooz A underground reactor, whose caverns, 50,000m3 in total, were to be emptied and then filled in. Access to these caverns, which had been almost science fiction for us until then, suddenly became a possible opportunity to explore, especially since at that time the developments of LiquidO were beginning to take shape. Teams from APC, LAL (now IJCLab), LNCA and SUBATECH worked on the question and the SuperChooz project naturally emerged thanks to its strong potential in the precision physics of reactor neutrinos. But we also quickly realized that with such a large detector, one of the largest in the world, SuperChooz would have the potential to become an observatory for solar, atmospheric and supernova neutrinos or even for geo-neutrinos. It was also possible to explore the decay of the proton with this experiment. Thus, several years of preliminary studies on the feasibility led to this agreement around the exploratory project SuperChooz Pathfinder which is supposed to last 5 years.

Isn't it problematic to put a neutrino detector in place of an old nuclear reactor?

The question is far from trivial. An experiment on neutrinos, which is highly sensitive to radioactivity, is to be installed in the cavern of an old nuclear reactor. In fact, EDF will dismantle all the equipment and then clean up the civil engineering structures. The radioactivity associated with the operation will then be removed and the site controlled by the Nuclear Safety Authority. Only at this stage can the cavern be decommissioned and made available. On the CNRS side, we have made estimates on the basis of the figures provided by EDF, and it is rather the cosmic background noise that should dominate because of the limited burial of the site. But more precise estimates will have to be made during the exploration phase of the project. In the context of SuperChooz Pathfinder, EDF engineers will mainly verify that the cavern is well adapted to the installation of the detector. There is a precious relationship of mutual aid that has developed over time between EDF and IN2P3. And this is a unique opportunity that we have here.

Artist's view of the project