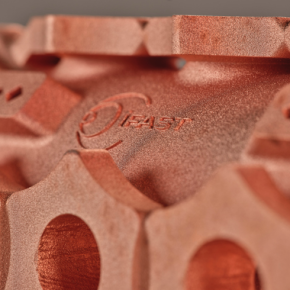 the radiofrequency quadrupole (RFQ), a copper part of great geometrical complexity capable of grouping in packets the ions produced by the sources, and of accelerating them at the speed of light. Image : Brice, Maximilien
-A +A
Share this content
Print

As part of the European I.FAST particle accelerator R&D program led by CERN, a radio frequency quadrupole (RFQ), one of the most complex elements of particle accelerator, has been synthesized in one piece using 3D metal printing. The part, presented at the Frankfurt Formnext trade fair from November 7 to 10, is to be sent to the IJCLab where it will undergo a number of tests. Nicolas Delerue, research manager and accelerator specialist, is looking forward to it.

What does 3D synthesis bring to a part like an RFQ?

These complex parts are usually produced in two half-cavities that are welded together, whereas in 3D synthesis, the RFQ is produced in one piece. This manufacturing method also allows the integration of the cooling circuits in the heart of the part, precisely where it heats up, whereas normally these circuits must be welded. Another advantage is the possibility of making thinner electrodes than with traditional machining.

Can 3D synthesis help to produce better performing accelerators too?

The accelerators will not necessarily be more efficient, but we can imagine designing machines that until now seemed out of reach because of their complexity and cost. For example, we are looking at the feasibility of 3GHz cavities to build electron accelerators, which could have applications for future accelerators such as the PERLE project.

Is there a gain in manufacturing cost too?

That's what you hope for in the end. In the case of complex parts such as an RFQ, manufacturing is greatly simplified. Not to mention that the scale of the parts designed in this way can also be easily modified. This cost reduction could thus benefit fields for which these objects were too costly, in particular in medicine.

How was this piece conceived?

The machine was designed mainly by our partners at CERN, the Politecnico di Milano, the Fraunhofer Institute IWS and the Technical University of Riga. It is made entirely of copper by powder sintering with a green laser that provides power and precision. IJCLab had a mainly advisory role due to our experience gained on parts produced in 3D metal synthesis from 2017 to 2019. IN2P3 has developed an expertise on additive manufacturing in physics of the 2 infinites for several years which involves several of our laboratories: IJCLab, IPHC, LPSC, SUBATECH and LPNHE.

Do you plan to work with other metals than copper?

In the case of this RFQ, the synthesis is indeed all copper, but there are also plans to test aluminium or titanium parts. We even hope to combine metals with ceramics. The I.FAST programme has a very strong innovation focus that will allow us to explore things very far.

What kind of test will the part undergo at IJCLab?

We will first put the part under vacuum in order to check its tightness. This method of manufacturing by powder sintering gives rise to fears of leaks, although our experience so far has shown that this is not the case. Then we will couple it to a low-power radio frequency source to measure its behaviour. Finally, it would be ideal to couple it with a proton source to test its performance, but we do not have such a beam at the IJClab.