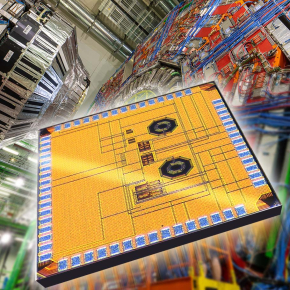 This clock generator, designed at IN2P3, has the qualities required to beat time in the electronics of the future high luminosity LHC detectors. © Patrick Dumas/CNRS-IN2P3
-A +A
Contact(s)
Hervé Mathez
Rodolphe Clédassou
Emmanuel Jullien
Share this content
Print
Détecteurs

A team of microelectronics engineers from three IN2P3 laboratories (1) has developed and tested two very high precision clock generators. These components will be used to beat the time in the detectors of the future high-luminosity collider at CERN (HL-LHC) in order to time with 2 picoseconds precision all the events that will occur inside. This 4th "temporal" dimension, which will enrich the data, will improve the precision and quality of the measurements while reducing the flow of data to be processed.

In the future High-Luminosity LHC (HL-LHC) the number of simultaneous proton-proton collisions is expected to increase from the current 40 at the LHC to nearly 200. The stacking of signals will become so large that new recording strategies must be developed to help unravel each particle spurt in the detectors one by one. A major line of development pursued by several physics experiments (Atlas@HGTD, CMS@HGCAL, ECAL2@LHCb, TOF-PET...) consists in performing a temporal slicing of each shot of the detectors thanks to an ultra fine electronic processing. In other words, it is a matter of precisely labeling the arrival time of thousands of signals in a single shot. In this way, physicists will be able to reconstruct the film of the formation of the final image and link the different traces more easily to each other.

This strategy has been explored by a team of microelectronic engineers from three laboratories of the institute (IP2I, IJCLab and LPC) in the framework of the IN2P3 R&T project Lojic130 supported by the MicRhAu group. Their work has led to the development and tuning of two components, called "phase-locked loops" (PLL), which beat the time at 2.56 GHz measurement with remarkable accuracy. The tests and measurements that were conducted showed that each beat had an accuracy of 2 picoseconds, or an "absolute jitter" of 2ps rms in electronics jargon. This accuracy is a very good news for physicists, because without it, time tagging would not have provided any real added value to their analyses.  "It was a nice surprise to achieve this accuracy," explains the team of engineers involved in the test, "especially since we were working on very conventional TSMC 130nm silicon technology which limits us in frequency compared to 65nm or 28nm technologies."

Two PLLs have been designed: the first is based on an LC harmonic oscillator (association of a capacitor and a coil) and the second on a ring oscillator (self-serving oscillator that oscillates permanently between a high and a low state). In both cases, we measured an absolute jitter of 2ps," said the designers. "But both architectures have advantages and disadvantages that will have to be considered according to the specifications of the detectors. The LC oscillator, for example, requires a lot of silicon surface area, while the ring oscillator is rather power-hungry." As part of the Fastime R&T project, this basic brick has been further optimized and has just been coupled to a time-measurement circuit, which uses the beats of the PLL to "time" events. Here again, the results are promising because in simulation, the jitter obtained is less than a picosecond. The circuit will be engraved soon to be tested on an electronic board at the beginning of next year.

The Lojic130 project resulted in a publication in May 2022. It has provided important know-how to design the next generations of Asics in the field of time measurement. A transfer to TSMC 65 nm technology is planned in the framework of an R&T (2) for the future LHCb electromagnetic calorimeter.