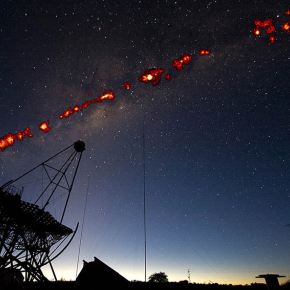 In 20 years, the H.E.S.S. observatory has revolutionised gamma-ray astronomy by opening an unprecedented window on the most violent phenomena in the universe. Image : H.E.S.S. Collaboration
-A +A
Contact(s)
Mathieu Jacobé de Naurois
Vincent Poireau
Emmanuel Jullien
Share this content
Print
Astroparticles

In June 2002, the H.E.S.S. collaboration directed its first telescope towards Blazar PKS 2155-304, one of the brightest active galactic nuclei in the southern hemisphere.Scientists aimed to explore the Universe in a new way, by seeking to detect very high energy gamma rays, radiation that only very energetic cosmic phenomena are capable of producing. 20 years later, their hopes have not been disappointed. Year after year, the sky, so calm in appearance, has been filled with several hundred new sources testifying to cosmic phenomena of previously unsuspected intensity. A look back at the H.E.S.S. epic with Mathieu de Naurois, researcher at  LLR and deputy international director of the collaboration.

Sources detected by the H.E.S.S. observatory along the Milky Way. There are several dozen of them. Image : H.E.S.S. Collaboration

You see this image, it is of our Galaxy, the Milky Way. All the bright spots that stand out are sources of very high energy gamma rays: pulsars, binary star systems, supernova remnants, pulsar wind nebulae, etc. A whole population of objects discovered, for the most part, over the last 20 years and which are all manifestations of a hyper-violent face of the Universe, the importance of which no one suspected. In 2000, only eight such sources were known and the ultra-violent Universe was of little interest to scientists. Today, the number of sources detected is approaching 300 and high-energy gamma-ray astronomy has definitely acquired its credentials. This small revolution in our vision of the Universe is largely due to the commissioning of the H.E.S.S. telescope in Namibia in 2002. That was just 20 years ago.

The result of 30 years of research

If the H.E.S.S. telescope array revolutionised gamma-ray astronomy at the beginning of this millennium, to the point of receiving the prestigious Descartes Prize awarded by the European Commission and the Rossi Prize from the American Astronomical Society, it was not by chance. It is above all because the instrument was the culmination of more than 35 years of research to try to capture, from the ground, this highly energetic radiation, which space-based instruments are unable to perceive. The adventure began in 1967 in Arizona with the Whipple experiment, which commissioned the first telescope designed to collect the tiny flash of light that very high-energy gamma rays indirectly trigger when they enter the atmosphere. The telescope is a giant composite mirror 10m in diameter, made up of 248 small mirrors, which focus the light from the flashes onto a camera placed at the focal point. At the time, scientists did observe the existence of these luminous traces, but it was impossible for them to extract any information about the cosmic origin. The technique was the right one," explains Mathieu de Naurois, "but the camera technology at this time made it impossible to detect them at all because the flashes are much too short, in the order of a few nanoseconds. It was not until 1989, when the number of camera pixels was increased, that the technology finally made it possible to locate with certainty the first high-energy gamma-ray source in the sky. This was the Crab Nebula, a pulsar wind nebula located in our galaxy.

H.E.S.S. does in 5 minutes what took hours before

The foundations have finally been laid, but the technique is still struggling to see things clearly. Only one of the most powerful sources in the sky is perceived. In the early 1990s, Whipple was joined by two other experiments, HEGRA and CAT, both of which provided two decisive technological building blocks. HEGRA deployed several telescopes to observe the traces from several angles and obtain a stereoscopic view," explains Mathieu de Naurois, "while CAT, the first French gamma-ray astronomy experiment deployed on the site of the Thémis solar power plant in the Pyrenees by LLR pioneer Patrick Fleury (1), experimented with a finely pixellated camera with fast electronics, which could both capture and process the signal before transmitting it to computers. Both approaches show their potential, but more is needed to get high-energy gamma-ray astronomy off the ground. At the same time, an international community is building up and gradually converging on the design of H.E.S.S., a next-generation instrument with the best of each observatory already in operation: the large-mirror telescope system invented by the Whipple collaboration, the stereoscopy experimented by HEGRA, and the fast electronics integrated into the CAT camera. Whipple needed 25 hours of exposure to detect a source at the level of the Crab Nebula. H.E.S.S. could do the same in 5 minutes.

Five telescopes in an array

H.E.S.S. is an observatory consisting of five array telescopes made of composite mirrors topped by a fast electronic camera. Four 'small' telescopes of 12 m and rounded shape, built from 2002 to 2003, are arranged in a 120 m square for stereoscopic viewing. A large central 28 m parabolic telescope was added in 2012. The whole thing is set up in Namibia on the semi-desert Gamsberg plateau. It's a magnificent and wild site where I love to go," says Mathieu de Naurois. It's an hour and a half's drive from the capital Windhoek and you can see a lot of different types of antelopes, ostriches, zebras and even baboons. But it's not the exoticism that made us choose this place. Above all, it meets the many requirements needed to observe the light flashes in the best possible conditions. The first requirement is to position the observatory in the southern hemisphere, at the level of the Tropic of Capricorn, to have a privileged view of the central regions of the Galaxy. Then you need a dry region, with clear skies and no light pollution. And finally, you need to be at an altitude of around 2000 m. "This is strategic! explains the LLR researcher. The air-showers of particles produced by gamma rays form at an altitude of about 10 km and emit a very fine cone of light that covers an area of about 250 m in diameter on the ground at the observatory. At higher altitudes the cones would be too narrow and fewer would hit the telescopes. At lower altitudes, however, the signal would be too attenuated by the atmosphere. The optimum is between 1500 and 2000 m and on the Gamsberg plateau we are at 1850 m altitude. Apart from another site in the foothills of the Andes in Chile, only the Namibian site meets all the conditions.

As well as being well placed, H.E.S.S. is almost as agile as the bands of baboons that regularly visit it. Despite their imposing stature, the telescopes as a whole can be tilted towards a point in the sky in less than two minutes. "Paradoxically, it is the central telescope that moves faster than the four smaller ones," laughs the scientist. As a result, the observatory has brought very high-energy gamma-ray astronomy into the era of multi-wavelength and multi-messenger astronomy. When an exceptional event is detected by another observatory, in the visible, gravitational waves, radio waves, etc., an alert is given with the coordinates of the source. All the instruments that can do so will then turn in that same direction. For H.E.S.S., the decision to interrupt the observation programme to turn towards the new target is taken in two seconds," says Mathieu de Naurois. These alerts have enabled us to observe extreme phenomena such as gamma-ray bursts or thermonuclear explosions on the surface of stars tearing off matter from a companion star." The rest of the time, the telescopes scan the sky or observe targets according to a programme drawn up in advance based on requests made to the observatory. Three people take turns in the site's control room to ensure three-week observation shifts corresponding to the lunar cycles.

A science with a bright future ahead

"I go there myself every one or two years or so," says Mathieu de Naurois, who has been working on this project since the beginning and who, as soon as he finished his thesis, got hooked on laying the foundations of this still almost virgin field of astronomy. "H.E.S.S. has really changed everything. We now know that the Universe is active in all areas of the electromagnetic spectrum and that gamma rays are an important component. And thanks to these observations, we now have a better understanding of what happens in supernova remnants, the centre of the Milky Way or in gamma-ray bursts and active galactic nuclei, to name but a few. In these phenomena, cosmic rays are accelerated to several hundred TeV and can play a role in the redistribution of matter in intergalactic space and influence the evolution of the Universe.

In fact, a whole new science has emerged from these observations. A science that still has a bright future ahead of it, since CTA, a new very high-energy gamma-ray observatory that is even more powerful than H.E.S.S., is already under construction to open the window on the violent Universe wide. CTA will have more than 60 telescopes from 4 to 23 in diameter and will be located at two sites. The first, in the south of the globe near the Paranal Observatory in Chile, will be dedicated to the multiple sources in the central regions of our Galaxy. The second, in the north on the island of La Palma in the Canary Islands, will be devoted mainly to the study of extragalactic sources such as active galactic nuclei. Its progressive start-up is expected for 2025, by which time it will be time for the H.E.S.S. observatory to hand over.

A look back at the 20 years ceremony

Some videos of the event shot by the local media:

In 20 years, the H.E.S.S. observatory has revolutionised gamma-ray astronomy by opening an unprecedented window on the most violent phenomena in the Universe.

The H.E.S.S. observatory celebrates its 20th anniversary.
H.E.S.S. was created in 2002 to observe the most violent phenomena of the Universe.
It is located in Namibia, at an altitude of 1800m, in a region well known for the excellent optical quality of its sky! It is the largest observatory of its kind in the world.
Its 5 telescopes track high-energy gamma rays, rays that only the most violent phenomena in the universe can produce.
In 20 years it has helped to discover nearly 300 high-energy gamma-ray sources.
He has thus revealed a universe that is much more turbulent than previously thought.
In 2006, H.E.S.S. was ranked as the 10th most influential observatory in the world.
As it celebrates its 20th anniversary, its quest continues.
In a few years it will fade away in favour of the new CTA gamma-ray astronomy project.
Happy birthday H.E.S.S.!

About the H.E.S.S. collaboration

In France, the CNRS and the CEA are the most involved organisations, through nine laboratories:

France is also already involved in the CTA project for the development of the new generation of telescopes, a Very Large Research Infrastructure in the national strategy of the Ministry of Higher Education, Research and Innovation.